The Ministry of the Economy published, on April 15, the list of 20 approved microfinance establishments in Gabon. An approach aimed at preventing scams in this buoyant sector and thus protecting users.

In Gabon, only 20 microfinance establishments are approved. © The Union

Scalded by the proliferation of informal microfinance institutions (EMF), the Minister of the Economy wants to preserve users. Nicole Roboty has published the list of 20 accredited microfinance establishments in Gabon. “The Ministry of the Economy and Recovery wishes to remind economic operators once again that the exercise of the activity of collecting savings requires obtaining an authorization issued by the Monetary Authority. Any offender necessarily exposes himself to the sanctions provided for by the texts.warned a statement issued on April 15. 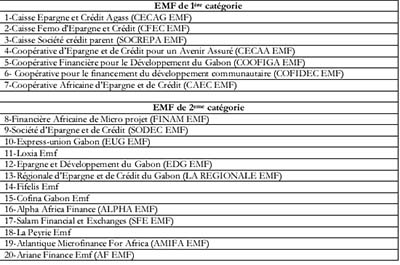 The list of approved MFIs in Gabon. © Capture I Gabonreview

The press release from the Ministry of the Economy comes two weeks after that of the Association of Microfinance Institutions of Gabon (APEMFG), which announced its intention to identify “all informal structures that pose as microfinance institutions and denounce them to the competent authorities”. An approach aimed at “protect the savings of economic operators in the Gabonese Republic”. EMFs receive deposits from their clients, grant loans, monitor their repayments, handle cash.

Over the first nine months of 2021, deposits collected by these institutions amounted to 72.3 billion CFA francs, up nearly 16.0%, compared to 62.4 billion CFA francs in 2020 at the same period. A juicy activity that inevitably attracts poachers. To this end, Nicole Roboty has called on users to “the greatest vigilance in the face of crooked operators and to systematically denounce them to the competent services”.