Based on the accounting data received by the Umoa Banking Commission for the last two financial years, namely 2018 and 2019, the number of SFDs falling under Article 44 has increased by fourteen (14) units to stand at one hundred and eighty eight (188) institutions.

It should be noted that, according to the provisions of Article 44 of the Law regulating Decentralized Financial Systems and those of Bcéao Instruction No. 007-06-2010 relating to the methods of control and sanctioning of Bcéao and the Umoa Banking Commission, the Central Bank and the Banking Commission proceed, after informing the Minister, to control any decentralized financial system, the level of activities of which reaches a threshold of two (2) billion CFA francs. outstanding deposits or loans at the end of two (2) consecutive financial years.

The landscape of Sfds falling under article 44 is made up of eighty-four (84) networks and unitary institutions and one hundred and four (104) basic funds affiliated to a network. Unitary networks and institutions include non-affiliated companies, associations, networks and mutual institutions or savings and credit cooperatives (Imcec). The average capitalization ratio of UMOA SFDs stood at 22.9% in 2020 against 22.6% in 2019, for a minimum standard of 15%.

Total balance sheet of DFS in Mali: 8.7% of that of Umoa

The financial and statistical data analyzed by the Commission Bancaire concern one hundred and eighty-two (182) SFDs, i.e. 96.8% of large institutions. For Mali, there are 17 SFDs, distributed as follows: ten (10) networks and unitary institutions (three (3) companies, two (2) associations and five (5) networks). In addition, there are ten (10) base caisses affiliated with a network. Their total balance sheet weighs only 8.7% of the total balance sheet of all Umoa SFDs, both in 2020 and 2021.

Decline in financial fixed assets of 4.5% in Umoa 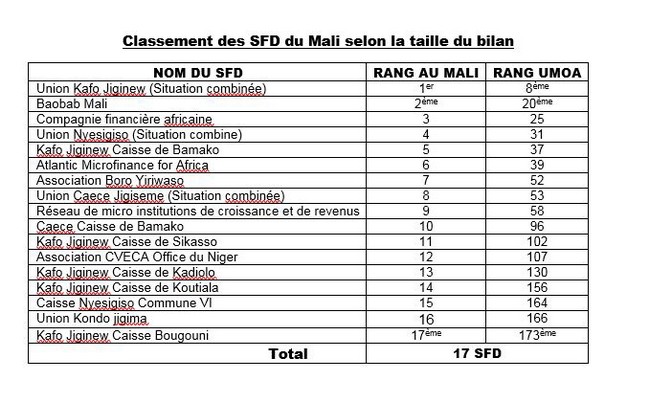 As for other resources (related debts, payments to be made on securities and financial fixed assets, suspense and miscellaneous accounts, provisions for risks and charges), they increased by 6.9% to stand at 139.8 billion CFA francs at end of December 2020.

It should be noted that the profit margin, which measures the share of operating income generated on the total amount of operating income, fell by 3.9 percentage points between 2019 and 2020, from 7.7% to 3.8%, for a minimum standard of 20%.

It should be noted that under the provisions of Articles 31 and 32 of the Appendix to the Agreement governing the Banking Commission, the Supervisory Authority took, after having duly convened and heard the managers of Sfd establishments established in Umoa , disciplinary sanctions, namely six (6) reprimands and one (1) warning. In particular reprimands against four (4) credit institutions: in Benin (1), Burkina (1) and Senegal (2); blame against a Sfd installed in Mali (1); reprimand against a leader of a Sfd from Mali (1) and a warning against one (1) leader of a Sfd from Mali. As we can see, of the seven disciplinary measures announced, three (3) concern Mali.