The Deputy Managing Director of Finam Gabon, Noël Mboulou Mavouroulou, recently installed a Distributer hasautomatic from beyelets (DAB) din the city of Mouila, capital of the province of Ngounié. This equipment will be accessible to all establishments affiliated to the Gimac network.

The deputy general manager of Finam Gabon, Noël Mboulou Mavouroulou launching the official commissioning of the Automatic Teller Machine (DAB) in the city of Mouila. © Finam

Long-awaited, the installation of an ATM in Mouila is effective, thanks to the Financière africaine de micro-projets (Finam), a partner of the BGFIBank Group. The installation of this machine, which will benefit all users of establishments affiliated with the network of the central African electronic banking interbank group (Gimac), is part of a strategy to equip all Finam branches in the hinterland. 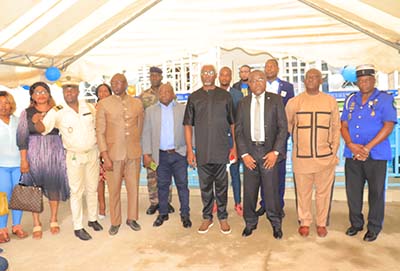 An ATM is a distributor allowing the holder of a bank card to withdraw cash and/or consult his bank account after entering a confidential code. This device makes it possible to avoid waiting at the counter. “This deployment of Finam makes it possible to be closer to customers and contributes to the country’s financial inclusion. Faced with the daily hassles of customers, the opening of the ATM comes at the right time to shorten their pain and make their ambitions come true,” indicated the deputy general manager of Finam Gabon, Noël Mboulou Mavouroulou.

After Mouila, this operation will continue in other localities, notably in Makokou, Koula-Moutou and Tchibanga in the fairly near future. The Mouila branch is one of Finam Gabon’s 18 interconnected network branches. It now has 3,786 customers divided between individuals and professionals, with several credit files for the benefit of customers.