The African micro-project financier (Finam) has just opened an agency in Koulamoutou in the province of Ogooué-Lolo, the 17and on the national territory. The first 2nd category microfinance institution intends to meet the needs of the population, by making financial services simple, accessible and fast.

The Koula-Moutou branch is the 17th branch set up by Finam across the country. © DR

As part of its growth and geographic expansion, Finam officially opened its branch in Koulamoutou, in the province of Ogooué-Lolo, on 20 August.

This new agency, whose main mission is to provide financial services and support advice to micro and small formal and informal enterprises, will offer savings services in several forms, money transfers and insurance. The aim is to offer populations a range of simple, accessible and rapid micro-financial services. 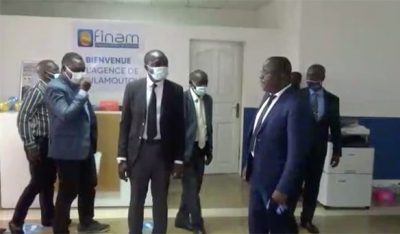 “EMF-Finam SA wishes to make its contribution to the economic development of the province, by offering innovative, useful and adapted services to all, in order to respond effectively to the needs of local residents. This decision fits logically and naturally with Finam’s long-term vision and objectives, to extend its network of agencies throughout the national territory and to become the reference microfinance in Central Africa.“, assures the general management of Finam.

Happy to be taken into account in Finam’s network extension strategy, the authorities of Ogooué-Lolo wanted a sustainable installation of microfinance in their province, to “support the populations and respond by their proximity to the plan to accelerate the transformation of our economy dear to his excellence Ali Bongo Ondimba“.

The Koula-Moutou branch is the 17and An agency set up by Finam across the country, microfinance is present in 7 of the country’s 9 provinces. The objective is to participate significantly in the development of economic activity in this province where a multitude of businesses are emerging in several sectors of activity.

Finam is the first 2nd category microfinance institution, approved by the Banking Commission (Cobac) established in Gabon since 2005 with a capital of 3.479 billion FCFA.